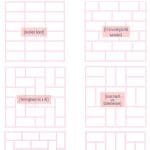 Subway tile patterns. There are a ton to choose from. Too many, Sometimes too many options can be paralyzing, right? That’s why we created this post.

We’ve done a lot of bathrooms in our day, and in every one of them, we’ve used some form of rectangular tile or subway tile.

In our most recent master bathroom renovation, we used several different subway tile patterns. On the floor, we used a “crosshatch” pattern. Also often called a “basketweave” pattern.

Herringbone is one of the subway tile patterns we’ve used in almost every bathroom remodel we’ve done. Here it is on the floor of our “we’ll never be royals” powder room (below):

Below, in the little bath we affectionately call “Napoleon’s throne room” we used a herringbone pattern on the upper shower wall.

In our master bathroom (below), we again used a herringbone pattern on the half of the shower.

There’s really only one type of herringbone, but you can turn the pattern so that it’s oriented in different directions.

Probably the easiest subway tile patterns are done in a “running bond”. That’s the most basic pattern type, but there are several variations.

In our cottage bathroom above, the upper and lower sections of the shower were done in a running bond where each brick overlaps the one above and below by 1/2 of the width of the tiles.

And in our “dungeon” bathroom as we call it (below), we used the herringbone pattern on top, an accent tile in the center, then marble subway tiles on the bottom done in a running bond pattern.

And in general, the overall pattern you see below is our favorite type of shower enclosure tile installation.

A herringbone up top (usually standard sized 3″x6″ marble subway tile). Below that, a chair rail or pencil.

Below that, a band of accent tile of some sort. The accent tile is sectioned off below by pencil rail.

At the bottom, we’ll use either more standard-sized subway tile (as seen above), OR a larger variation of typically rectangular tiles (like below) installed in a running bond pattern.

Hope this has given you some good ideas of subway tile patterns you can use in your next flooring or bathroom project! It can be overwhelming figuring out what pattern(s) to use! If you just stick to these basic patterns, you can hardly go wrong! Happy tiling!

On the hunt for more simple home improvement ideas, and DIY home decorating inspiration? Be sure to check out these articles, too!