Well. That’s our word of the day. Why “well”? Well, that’s because we have a new basement window well to show you.

And also because “well” is the opposite of “sick”. SICK is how I’m currently feeling about our rec room renovation. It’s still much more “WRECK” than REC, I’m sad to report. 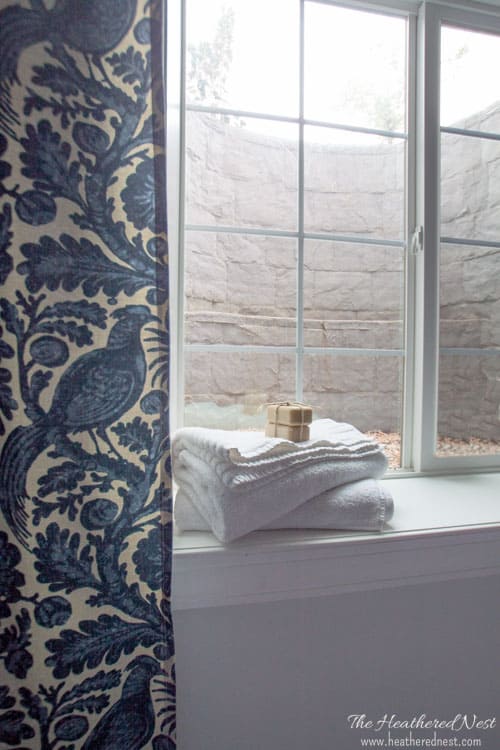 We’re  continuing to work on remediating the moisture and termite issues we found last week. 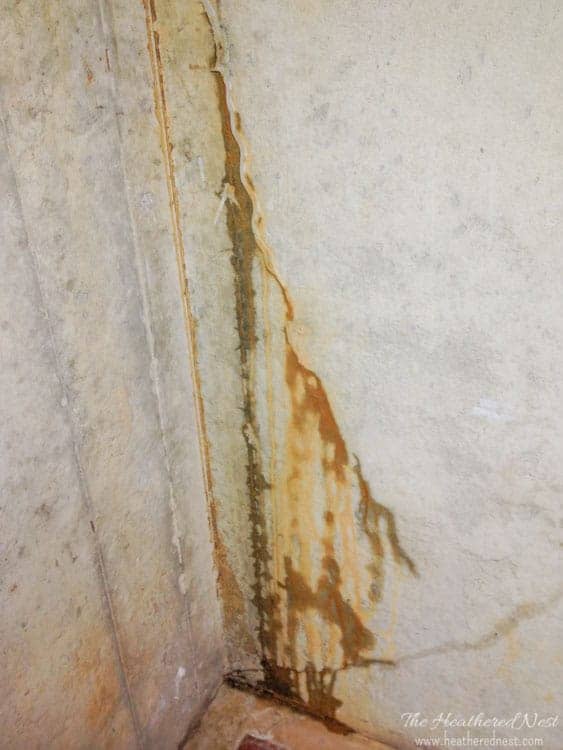 Somebody bring me a drink.

Anyways, I need to focus on the good. The things going WELL. One of those being the new window well. As I’ve mentioned in the past two posts about the current basement renovation, we completed a portion of the remodel down here a while back.

Those completed portions are our guest room, and the adjacent bathroom, which we affectionately call “Napoleon’s Throne Room“.

Lemme take you there. 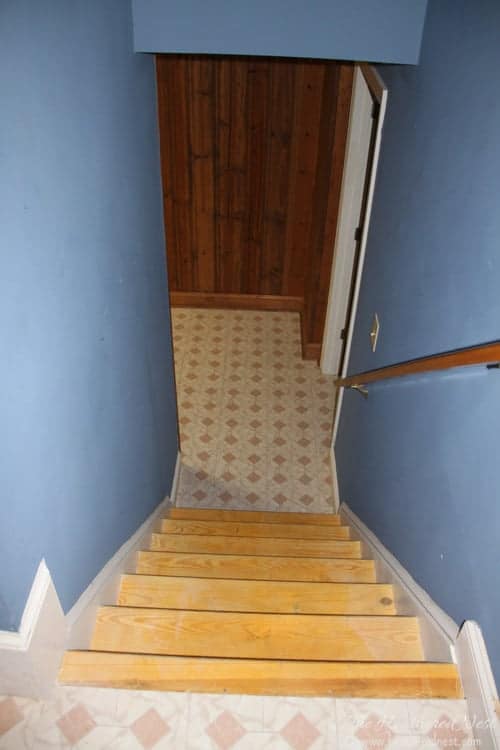 See that doorway at the bottom of the stairs to the right? THAT is the guest room. Before this project, that room was literally pitch black. How very inviting, right? Come on down the scary stairs and WELCOME TO THE CAVE! Hope you’ll be super comfy in here!

No thanks. You guys, it was SO dark in there that I absolutely COULD NOT get a legit before picture. 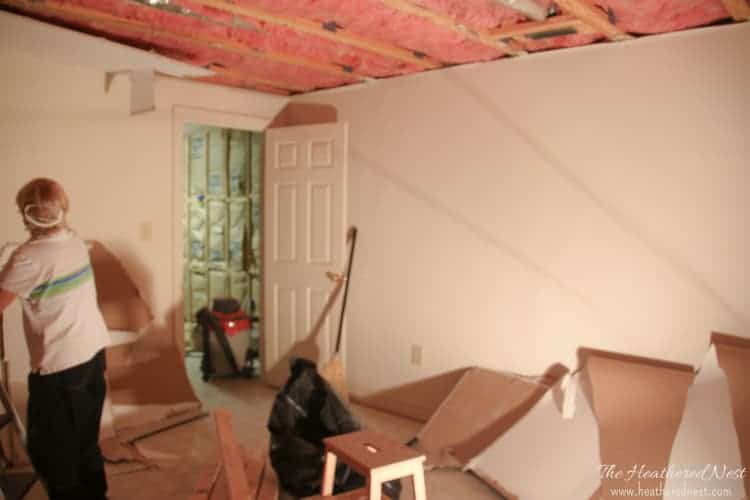 This is the best I could do as far as a “before” shot. That’s my Mom in that pic. She and I COULDN’T WAIT to gut this room. And the light from a work lamp is the only light we had in there during the demolition.

Which reminds me, I should have included a work light as one of the tools in our TOP TEN demo tools post last week. See ours in the right bottom corner of the shot below? 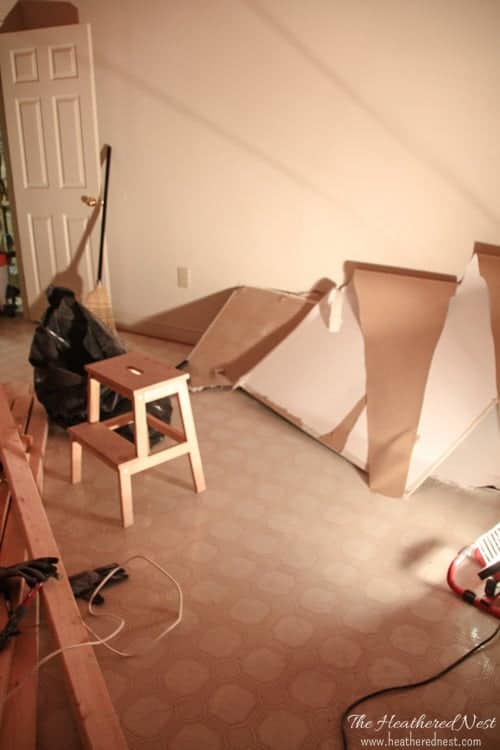 These things are critical when you’re doing a big project in dark spaces…like a basement. The blank wall you see above? Well, that’s where things are about to get crazy. Because IN comes our FIVE THOUSAND DOLLAR window well!! YIKES! I know.

That’s a lot. This window installation is by far, the most expensive line item on our basement renovation budget. But we think it was a wad-o-cash-well-spent, and we’ll tell you why. 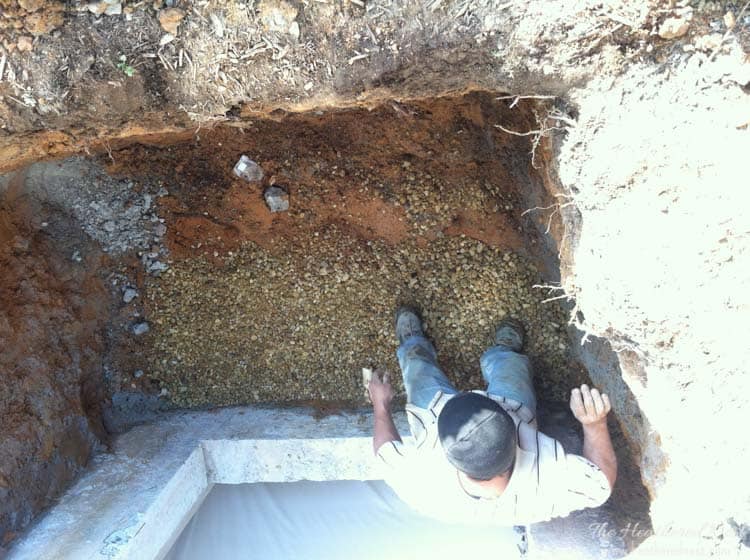 Although we pride ourselves on being ALL DIY, ALL the time here on our little DIY blog, there are admittedly some things that we feel like are still best done by someone other than us. Installing an egress window is one of those projects. And speaking of egress…

1. the action of going out of or leaving a place.

When people talk about an “egress window”, usually they are talking about a basement window. Specifically, a basement window which one could use to exit, or “egress” from if the house was on fire. OR, alternatively, one that a fireman, with his/her gear could enter and/or exit through, as well.

What makes an egress window worth the $$$? 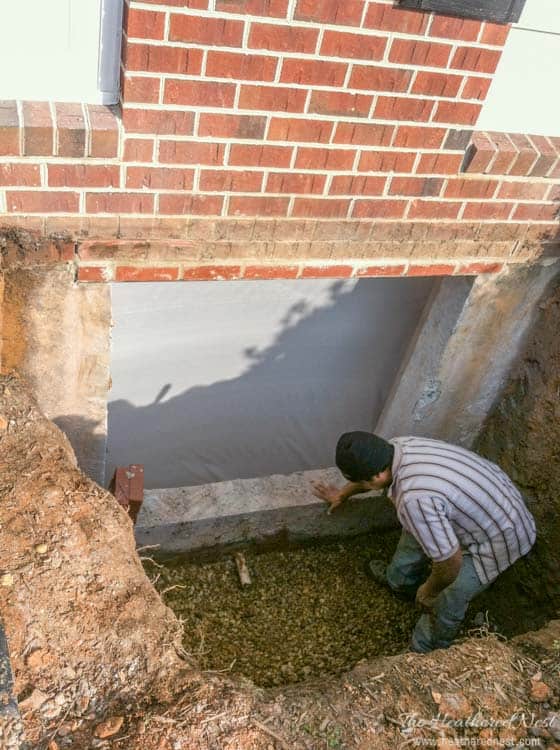 1.) If you did unfortunately have a fire in your home, an egress well window could save your life…so that’s something, right?

2.) If you screw up some DIY projects, the outcome doesn’t necessarily have deleterious effect. For instance, if you attempt to sew some DIY curtains, and end up with a seam that looks like it was sewn under the influence of 4 shots of vodka, what’s the worst that comes of that? A funny looking drape? A bad reminder of a horrible hangover every time you look at your window coverings? In other words, nothing much.

On the other hand, if a basement window/well window is installed improperly, you risk moisture issues in your basement. And TRUST ME, I know from firsthand experience the damage moisture can do (please see video at bottom of post, sigh). Find a reputable window installer, specifically one who specializes in window wells/basement windows, and don’t look back.

3.) Installation of a window well is a LOT of hard labor. Like an 8′ deep trench-worth. Plus, after digging all this area around the foundation out, a diamond bit drill has to be used to cut the opening in the foundation. French drains are then installed on both the interior and exterior of the home to help with moisture control. The egress window well with ladder is installed, followed by the installation of the window.

The window must be sealed and trimmed out on the interior and exterior. A LOT of work. Almost a week’s worth…and that was for the professional window installers. For amateurs, I can only imagine how long this process could have taken.

4.) Last but not least, we now have an additional legal bedroom in our home. GREAT for property value/resale. Lots of people claim to have bedrooms in their basements, but depending on your local code/state law, that may not be true. Here in Maryland, for a space to be considered a bedroom, it has to have a closet, and two ways of egress, a door and a window large enough that a fireman with all his gear can get in through it, or residents, including children, can get out of it in case of a fire.

So those teeny tiny windows that we often see in basements, way up high on the wall…they don’t count toward a bedroom count.

And now, with some natural light in the space, we could focus on, well, more fun things. Like our DIY wooden ceiling. That’s our reclaimed barn wood, below. 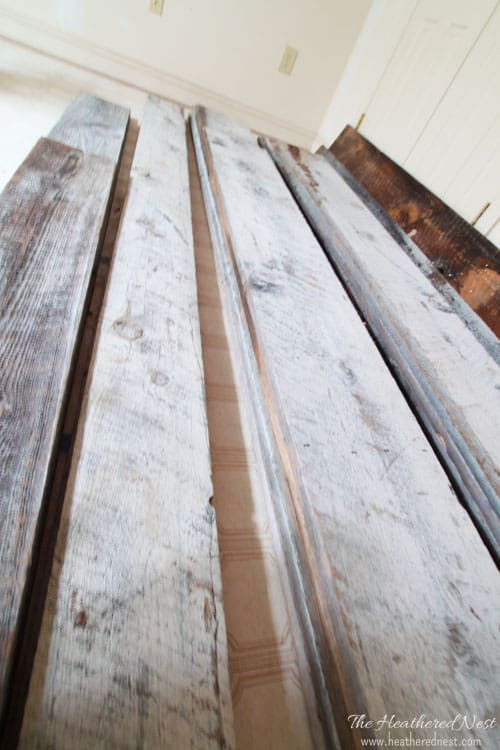 Up it goes! We wrote a tutorial on the process of installing the reclaimed wood on the ceiling, if you’re interested 🙂 And check out that new basement window! 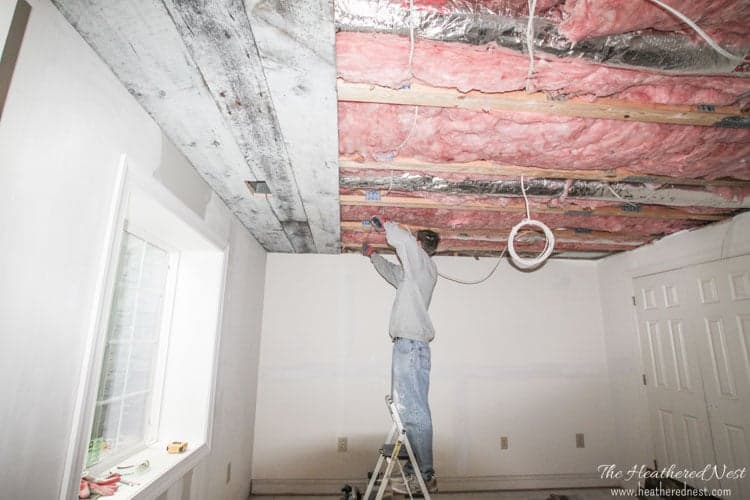 Well, well, well…let there be light. 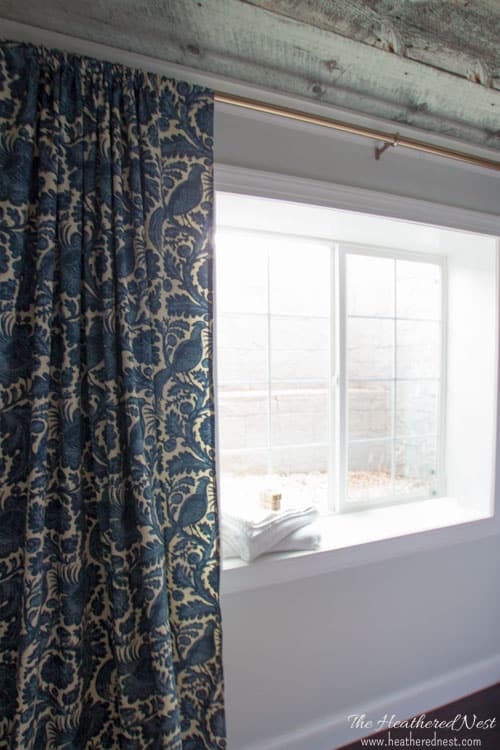 Don’t I wish the rest of the basement were nearing that point. Alas we’re stuck in the thick of the demolition nightmare still. Luckily, we have all the right demo tools, which we talked about last week, in case you missed it. 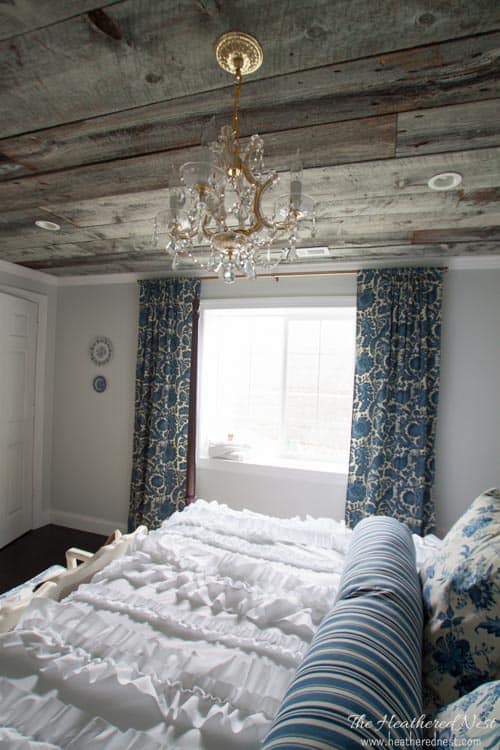 If you want more info on this guest bedroom, and our full source list, head >>> here <<<. 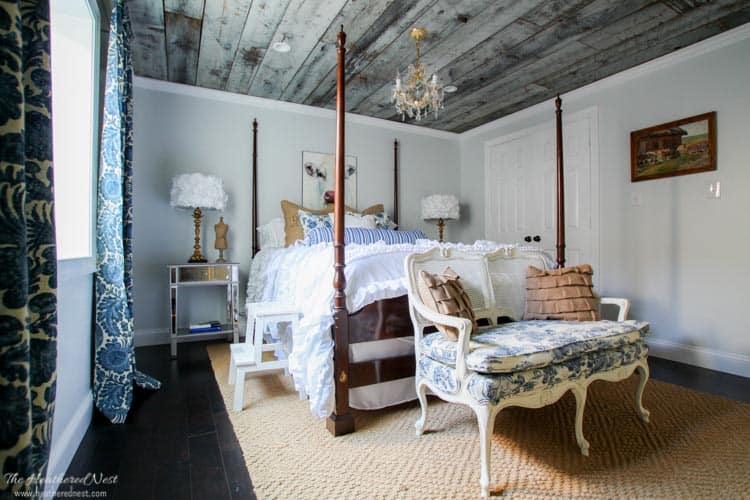 And now, I gotta get back into the muck. But, hopefully some good will come of all this mess. Like for one, I’m able to show you guys what termite damage looks like so that you can recognize it in your own home if you’re ever unfortunate enough to come across it. 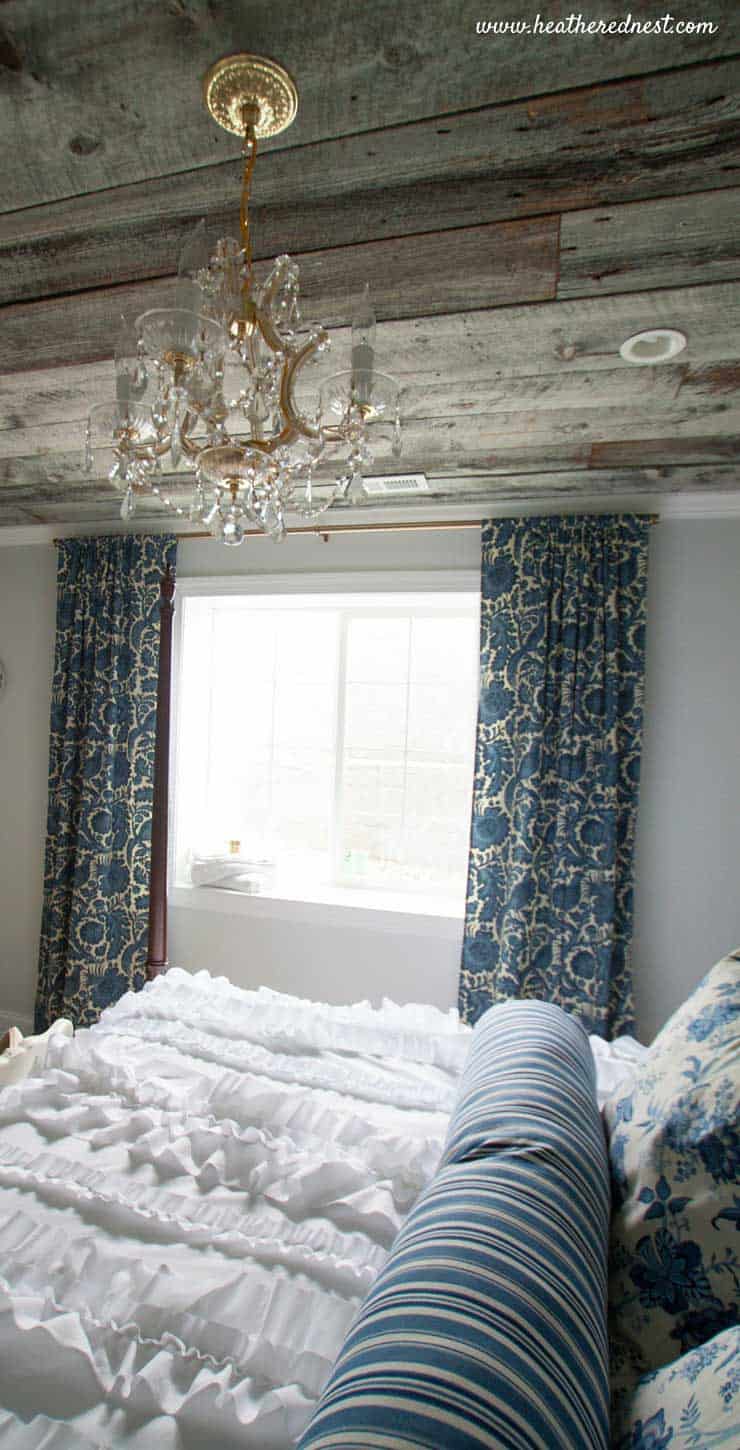 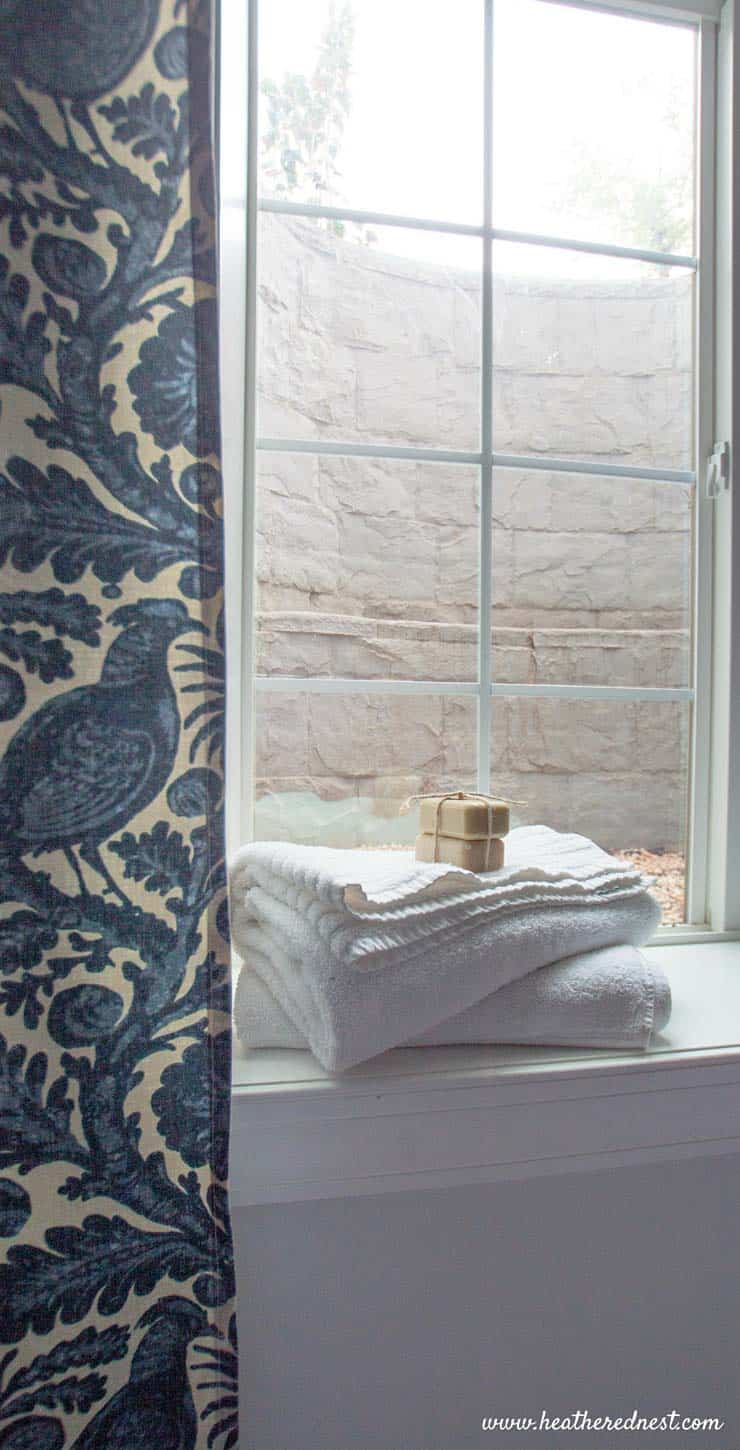 Pssst…before you go, I sure would love to hang out with you again really soon! Click here or on the image below and get a FREE copy of “Builder-Grade To Beautiful: 10 Totally Transformative Home Decorating Solutions, All Under $100!”

« The Top 10 Demo Tools you MUST HAVE. AND UPDATE-This is STILL the WORST basement you’ve ever seen.
Wasted. 6 Basic Waste Management Supplies Needed During Renovations. »