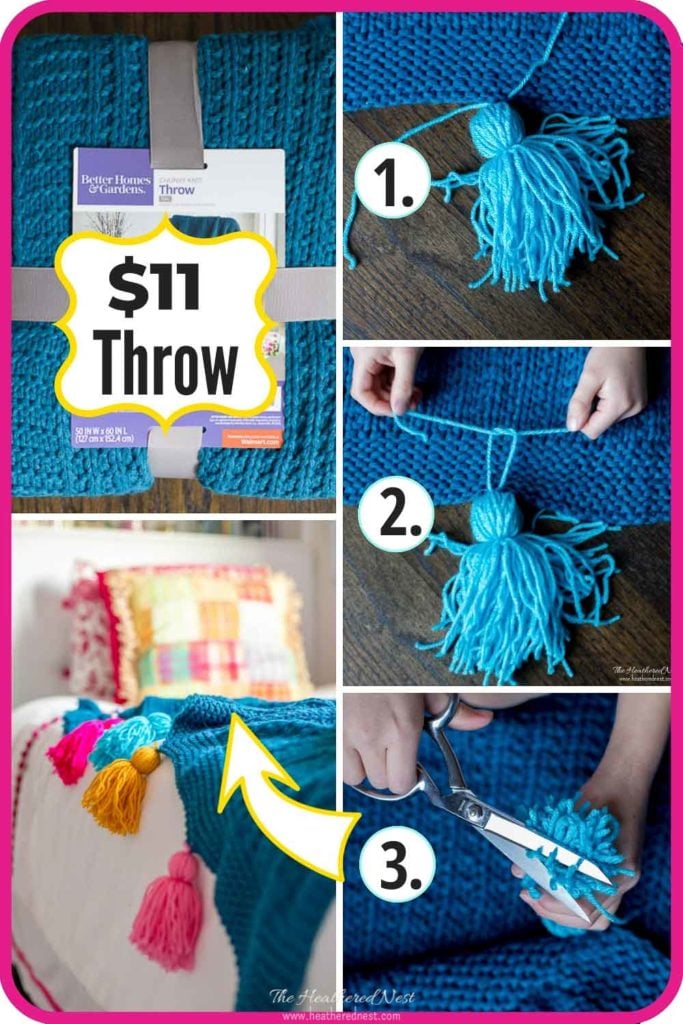 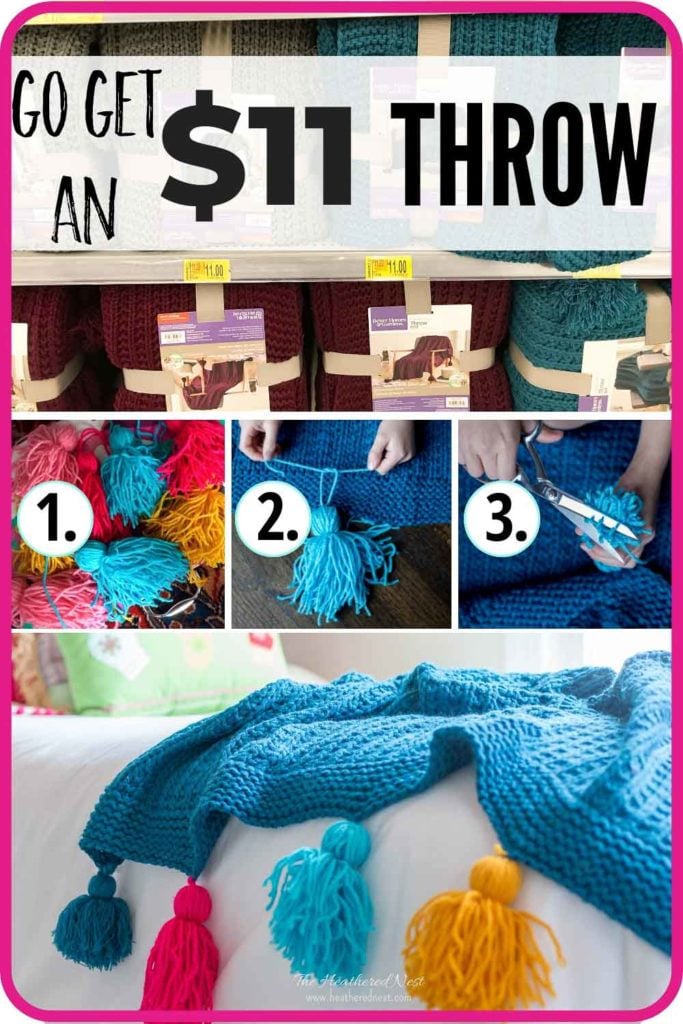 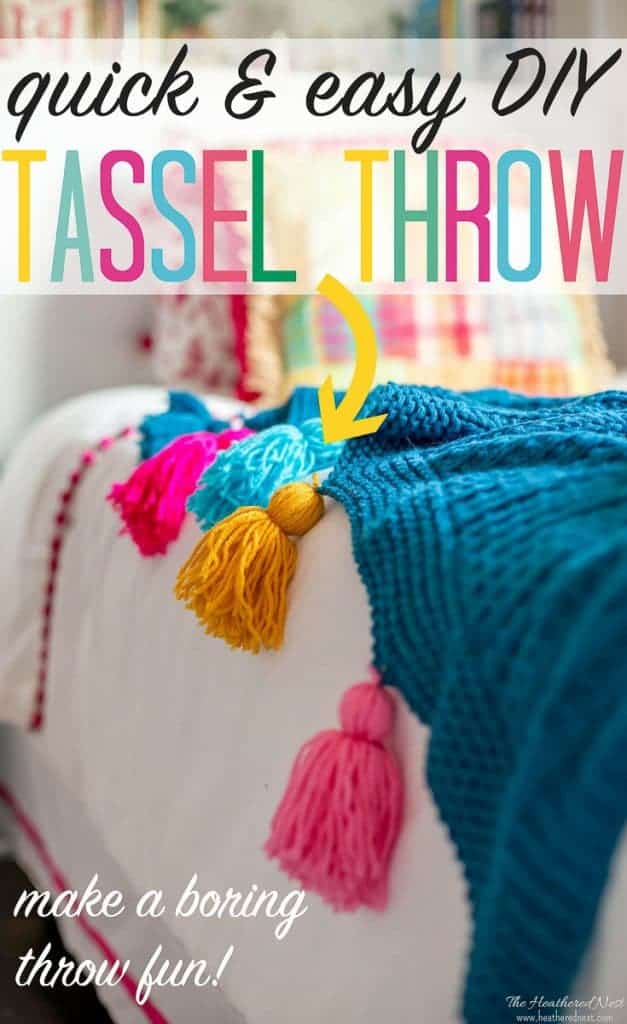 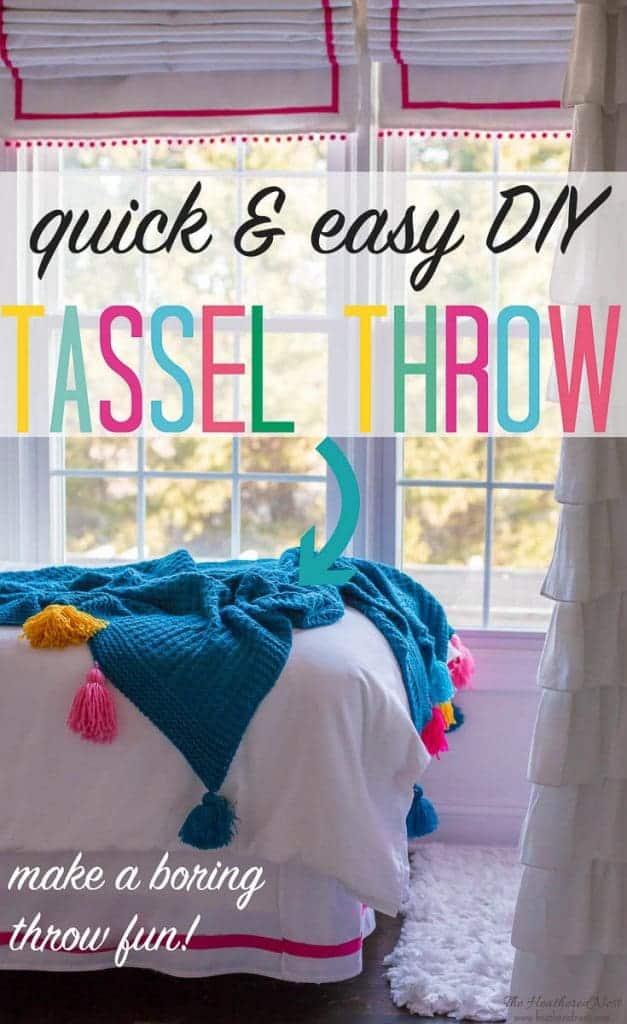 This DIY tassel throw was extremely quick and easy to make. And it was inexpensive to boot. The DIY project trifecta.

When I saw this blanket on sale for $11 I grabbed it. I’d been wanting to try making tassels, so adding tassels to this blanket seemed like the perfect opportunity to give it a try.

And you aren’t going to believe how flipping simple this project is!!

Video Tutorial: How to make a DIY tassel throw


You won’t need many supplies to tackle this project, here’s the short, simple list…

How to Make a DIY Tassel Throw

For some reason, making a DIY tassel was one of those DIY projects I was always scared to tackle. Like pom poms. Same deal. Don’t know why, but I just had some sort of mental DIY block.

My daughter is the one who snapped me out of it. She is super crafty, and we watched one or two YouTube videos on the how-to, and that was it. We were making DIY tassels in minutes. Seriously. It’s uber easy!

The video above details the process. It’s one of those things that’s easier to show than to write about. So check that out if you don’t know how to make them.

2. Tie the tassels onto the blanket.

Use a tape measure to determine the spacing you want between your tassels. Ours ended up being about 12″ apart so that they were spaced uniformly.

Once you’ve determined your spacing, you simply grab a tassel and tie it onto the edge of your throw. I’m not a boy scout, so I don’t know a lot of fancy knots. We used a simple square knot. And doubled it. Then we just trimmed off the extra yarn.

Yes, that’s seriously all. We finished this DIY tassel throw blanket project in about 45 minutes, ALL IN. Meaning, I’m including making the tassels and all.

Pin this DIY tassel throw blanket project for later! And if you make one, leave a comment on the pin and/or a picture…that really helps other people decide whether or not they could tackle this project, too! Thanks!!