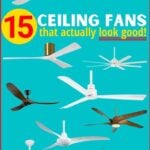 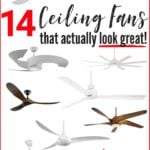 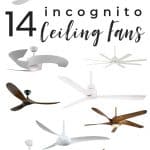 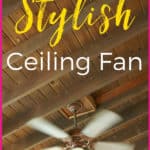 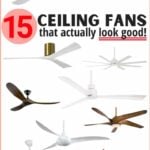 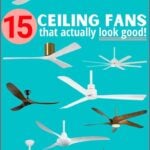 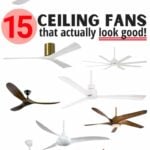 “Fans” are a four-letter word in the world of design.

I’d say it’s the equivalent of “moist” for the rest of us. And if you don’t think “moist” is cringeworthy, I really question our relationship. If you EVER say that word to my face, I cannot promise to remain non-violent. Fair warning.

I’m getting a little soft in my old age, I think. If you would have asked me in my 20’s to help you pick out a ceiling fan, I may have erased your contact info from my palm pilot. But time heals all things, and as such, I believe my relationship with ceiling fans is softening. A smidge.

Maybe it’s because of that one time I felt like I was having a hot flash and realized, WOW…this is going to really suck. Anyhow, I digress.

Point is, if I cannot talk you out of a ceiling fan (and I will try HARD), then let’s help you choose a ceiling fan that is not going to completely ruin the rest of your gorgeous room, ok?

How exactly is this accomplished? We need to stick to two basic tenets.

❤️ Any of these ceiling fans? Scroll through the pics below. Click on any fan to get more information:

If you do a search for ceiling fans on any retail website, you’ll find options such as “coastal” or “farmhouse” or “industrial”, etc. Avoid these completely. If they have a category next to industrial that reads “invisible” PICK THAT ONE.

We do not want our ceiling fan to be a design element. Instead, we want it to fade into the room so people don’t even know it’s there. Here are some examples of just that:

Melissa’s office fan is a great example. She lives in a part of the country where having a fan is a must. So she chose one that blends right into the ceiling.

If you live in a home with a definitive design motif…

such as “coastal”, then it may be ok to go for a ceiling fan that has a teensy bit of design flair, but again, don’t make the fan a statement piece. Kelly from Lilypad Cottage did that so well in her coastal master bedroom, below:

She used a ceiling fan that had a bit of a nautical nod, but it doesn’t overpower the space or draw considerable attention.

When there is other great stuff on the ceiling, do what Morgan did…

Another example of a ceiling fan done well is in my friend Morgan’s nursery. The space hasn’t been completed yet. But you can see between the amazing ceiling detail and that fantastic, bold wallpaper, the LAST thing that she wants people to be gawking at is the ceiling fan!

So she chose a very modern, straight-lined, no-fuss ceiling fan…and I think it looks lovely in the space.

If you don’t want a fan that will totally blend into the ceiling, another tasteful option is to have one that picks up another neutral color in the space, like a metal or a wood tone.

While the ceiling in this space is white, and the fan black, the color of the fan picks up many of the other design elements in the space. The door, shelving, rug, and furniture are also black so that on the whole, the fan doesn’t stick out AT ALL.

The fan blends in with the room seamlessly. She also chooses a relatively modern, simple, basic fan for this space. No special design statement made. In short, it’s perfect.

Rule #2 – Avoid the boob/fan combo at ALL COST.

We’ve established that “fans” is a four-letter decorating word. So is “boob”. As in “boob light”. Boob lights are the bane of so many of us homeowners’ existences. So WHY THE HECK would you opt to pay for and install another R-rated ceiling fixture into your home? We’re already having to deal with the questionable decision about this whole ceiling fan thing. Don’t make it worse.

*By the way, if you’re having boob light issues, we have A LOT of experience with fixing those up in a FLASH…get it? Flash? Anyhow, you can check any of these out to banish those boob lights on the double…

These ideas will banish ceiling cleavage conundrums in a jiffy:

And the funny thing is that there are SOOO many boob/fan combos out there. It’s like the boob light people and the fan people got together and said, you know what would be a match made in heaven? Us. And here comes their baby…the boob fan.

There’s another joke in there, but I’m going to pass that opportunity right up. Anyways, the point is…just don’t.

In fact, try really hard NOT to use a fan/light combo.

Chances are, the light it will throw is minimal. And it will undoubtedly not be fantastic light. If you only have one spot currently in your ceiling for a light fixture, consider adding more boxes for additional ceiling lighting in the way of pendants, or can lights…basically ANYTHING but the boob fan.

But, if you press and say, “I MUST HAVE A LIGHT/FAN COMBO”…then I’ll roll my eyes, and suggest you at least go for one with a very tasteful light, like the one above in this beautiful bedroom by Southern Studio.

And with those two rules out of the way, I held my gag reflex in check and was able to put together a list of 14 ceiling fans that are actually not horrible. In fact, I will admit, I would be fine having one of these in my own home. Maybe.

Click an image below to go directly to the fan.

*Have you seen or heard about CLEAR ceiling fans?? YES. CLEAR. If you detest the look of ceiling fans but LOVE the function, these may be the fans for you. I am personally a HUGE fan of this new design trend! Check out my 13 fave ceiling fans with clear acrylic blades here.*