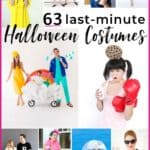 Let me guess. It’s the last minute, and you, or the kids, or you and the kids don’t know what your costumes are yet for Halloween.

Am I right? Of course I’m right! That’s probably because I decided two-hot-minutes ago that I’m going as a fortune teller this year. Nah. That’s not it. We’re all just busy, right?

Between the cramming for tests (your own or your kids), the meetings that ran late, the lunches that kept needing to get packed and the laundry that magically kept appearing in baskets at the house, halloween can sometimes be an after thought.

But that doesn’t mean we have to have lame costumes. Nope. We’ve gathered over 60 amazing ideas for last minute halloween costumes that on one would ever guess weren’t planned out for weeks…or better said, procrastinators will LOVE these costume ideas.

Many are quick DIY’s you can throw together for things already at the house. Some of my personal faves are the punny-ones that you make by safety pinning something to a t-shirt.

But whatever your style, we’ve gathered last minute halloween costumes that people of any age, gender and costuming persuasion will ❤️.

We gotta start this list of last minute halloween costumes with a a hot one. Annnndd this one may be as hot as they get 😂! Check out this genius punny costume idea.

An iteration could be cats and dogs instead of all the easy-on-the-eyes men. I personally enjoy this costume idea as-is though 😉.

2. Put Together in a Flash Audrey Hepburn Costume | The Joy of Fashion Blog

A black dress is truly a staple. Even when it comes to making a halloween costume last minute. You got everything you need for this costume in your closet. Except for the fancy cigarette thingy. But a paintbrush, or the kiddos’ magic wand from the dress up bin will do just as nicely.

Been working on that beach bod? Then this last minute halloween costume is perfect for you!

Me personally? If I’m going as Sally, I’m going as the 1890’s version. You know…back when they went to the beach in those bathing suits with pants and long sleeves?

Quick & colorful. And a good way to get in those fruits & veggies on a day when the food choices usually consist of nothing but items that come in a plastic wrapper.

This quick & witty costume idea is so FAST. And smart 🤓. And could be used on kids and adults alike.

Nab some lemons from the kitchen counter, and throw on some yellow, and you’ve got this adorable costume with a happy message.

Not sure how you costume out the difference soy vs. half-caf and such, but baby could go as tall, big brother as grande, and mommy as venti.

This halloween costume could only be last minute for super crafty-types, but it sure is a cute idea. And the sugar content is certainly in keeping with the high caloric Halloween spirit.

If Bachelorette is your guilty pleasure (my hand is raised) then this last minute halloween costume is perfect. Especially if you’ve been wanting to get a fun sequin-adorned dress for a while now but haven’t had a great excuse (hand still raised).

Are you down with the sparkling water craze? Sooooo good. And so are these costumes!

SUPER good looking halloween costume last minute procrastinators could pull off!! Get something monochromatic, and slap the word “PANTONE” on it. Done. A chic, colorful costume for decorating fans.

This one is awesome. My kids asked if she was Cruella DeVille. So I suppose this one could be a last minute costume two-fer.

Looks harder to make than it is. And the material needed is super economical. Such a fun idea. This year, there’s a great couples costume idea I’ve seen where one partner is the loofah, and the other is a bar of soap. Easy to pull off if you’ve got extra Amazon boxes in the garage. Or write “Zest” on some duct tape, slap it on a white shirt. Done 🚿.

Follow the easy tutorial for this fun witch cape, and pair it with some black. Grab a hat that you can find pretty much EVERYWHERE around Halloween and you’re off to the trick-or-treat races.

Fan of filters? This costume is for you and your snap-chatting friends.

A little ambitious despite the looming deadline? Then you can craft your heart out on this colorful cake idea.

Super simple. And if you want, swap out the blue shirt for red, and smush down the hat…you’ve got Santa Claus. A halloween costume idea for this year AND next rolled into one.

This is funny. Full stop.

Iron on a couple patches to a navy onesie, and your angel can be an astronaut.

How’s this for a genius halloween costume last minute? I’m partial to the sushi roll emoji, but this dancing emoji costume is perfect with a friend.

Super cool thing about these last minute costumes is that they look much harder to make than they are. You’ll get bonus point from everyone who thinks you’ve been working on your costumes for weeks.

Super sugary, fluffy and fun. This cotton candy idea is over the top sweet. And simple to put together.

Grab Solo cups, and a leftover Amazon Prime box. Then check out her tutorial. You’ll be Halloween parade ready in no time.

Over the top…or, over the rainbow adorable.

Not sure it gets much simpler than this couples halloween costume.

This kid will be the most popular at his class Halloween party with this last minute costume idea. Just raid the Halloween candy bowl a couple hours in advance, and you’re golden.

Add a little sunshine to the Halloween parade with this brilliant, citrus-y costume.

Another fun emoji costume idea! And one of the nicest ones, to boot. Much better than the angry face. Or the poop emoji, right?!

Super easy, super fun…albeit a bit on the criminal side family halloween costume to pull off in a flash. Just like that bank heist. Who can blame them? If that little guy was in a vault, I’d wanna snag him too!

If gardening was as easy as pulling together this fun little flower costume, us black-thumbed folks could easily trade up for a green one. Not only easy, but comfy and warm for your little rose bud, too!

LOL! Don’t tell me you can’t pull this together in 10-minutes or less.

More social media inspired halloween costumes for the last minute. This one gets a definite 👍.

Another brilliant costume idea that looks harder than it is. Granted, my talented friend Julia, who assembled this, is brilliant with makeup. But she shows us how simple it is to pull together this beautiful elf fairy costume on the fly.

My daughter saw this flamingo costume, and that’s what she’s going to be this year. We were able to put it together in under an hour. And it looks like it took us at least a day. It’s a great last minute option, and you can grab the boas at the Dollar Tree.

One of the simplest emoji costumes we saw. And it’s ADORABLE, right?!

Isn’t this one so so cute? And a perfect excuse to find an off the shoulder yellow dress. “😍” to quote that costume above ☝️!

This group costume is amazing. And so simple! Put the baby in the wagon and throw in a bunch of poly-fil! Or just bust up some old pillows into the stroller and call it a cloud ☁️.

What a great costume idea for an ergo-carrier!

Fan of frosé? This one is perfect.

Yummmy. And easy. Who doesn’t love spaghetti and meatballs with a little cheese. Cheesy costume? Maybe…but that makes it more fun.

A simple costume idea inspired by a well loved children’s book. This would be sweet for a little girl, too.

Mom Endeavors shows you how to throw together these last minute Jedi costumes in a few minutes.

Everyone loves when the UPS driver shows up. And this one is the cutest ever!

Lauren from The Thinking Closet has a LOT of fun and punny costumes on her site, so check it out for sure. This one she used her Silhouette for, but I think you could probably do a great job with just a Sharpie, too. And it’s wicked funny.

Have seen this same concept for a woman wearing a formal gown with “sorry” written on a sash, Miss America style. No need to apologize for having a costume that’s so easy to make when it’s this witty, too.

Awww, any Sesame Street costume is a win. And this one is great for last minute, too!

Looks difficult. But did you see the “no-sew”? Really. No sewing required. Deliciously easy.

WARM! And simple. And everyone loves Olaf.

This one won’t turn out great if you aren’t a little crafty, but it can definitely be done on the cheap. Leave yourself at least a few hours before the big night though to complete this sucker. Unless you want to go as a pop tart with a wet paint sign.

Angel credits @gracehelbig for this hilarious costume idea. This is truly perfect for last minute.

Your friends will be green with envy they didn’t think of this super simple last minute Halloween costume idea first!

Alright, so this one is R-rated, but pretty darn funny, nonetheless. Great for the adult party this year.

I LOVE witty, nerdy costume ideas, and this one fits that bill to a T. Or a Ti. Te. Tm. You name the element. More periodic table costume ideas? Try a “noble gas” or a “heavy metal” band or silver (Ag) and gold (Au). Or a lead (Pb) balloon. Or  wear an Einstein wig and go as Einsteinium (Es)! I could go on, but I’ll stuff down my inner geek again for a while.

Alright…I couldn’t stuff down the geek too far. Had to share another super smart and easy halloween costume to put together last minute. Who doesn’t love pumpkin pi?

How’s this one for easy?

Another great sandwich board idea that can be made in a jiffy. But only after coffee though, obviously.

And there you have it, 65 fantastic last minute Halloween costumes that are easy to pull off, but no one needs to know it!

Hope you found one or two you love. I’ll leave you with a joke. Here it is…

Get it? The answer: To get to the Halloween parade. And quick. We’re late!

Looking for more fun Halloween ideas? Check these out, too!

Before you leave, make sure to grab your free copy of 60 Simple Decluttering Wins – a list of 60 quick decluttering and organizing tasks that can each be completed in just 5 minutes time! Because the holidays are stressful enough without having to deal with clutter and disarray at home! LESS clutter = MORE holiday stress-free fun! 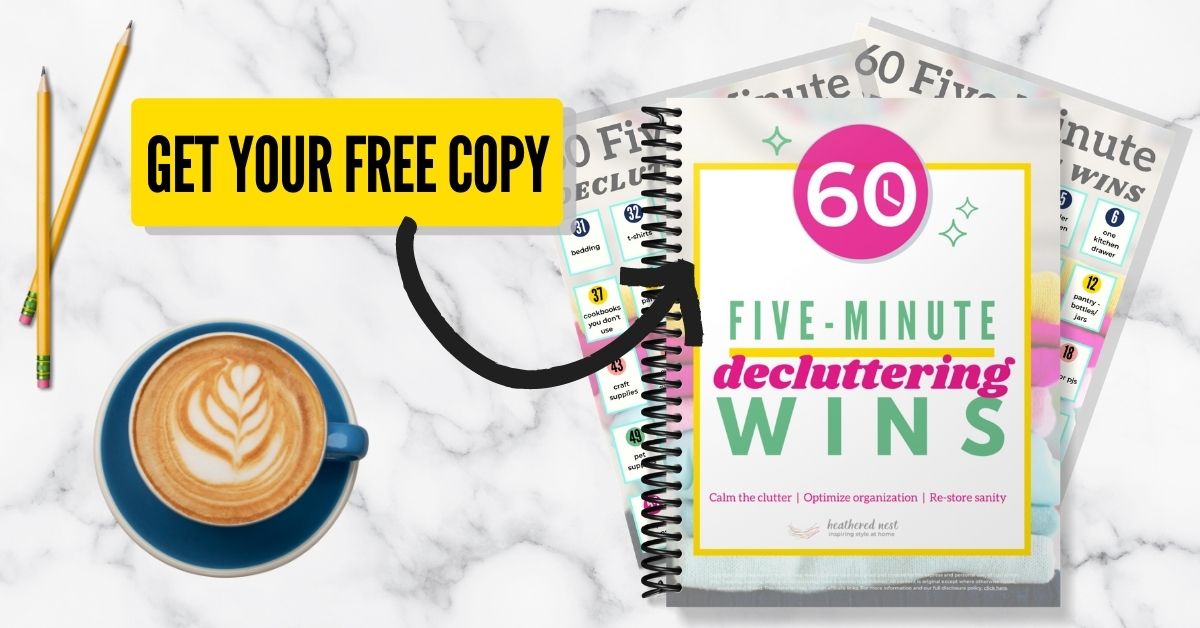