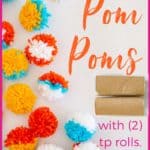 In this post, I’ll show you how to make yarn pom poms. We’ll be making the yarn poms using 2 toilet paper rolls (or a paper towel roll cut in half). It’s an easy method that makes BIG pom poms (about palm-sized, or slightly larger).

If you want smaller pom poms, try this tutorial for how to make pom poms with a fork.

This 3-minute video shows the entire process of how to make yarn pom poms with tp rolls. But if you’d rather read the instructions with photos, simply scroll past the video.

How to make pom poms with TP rolls video tutorial

*my grandmother bought me my first pair of real fabric/sewing scissors. she swore by this kind, and I have as well, ever since

How to make yarn pom poms with (2) toilet paper rolls

The video above will show you all you need to know, but if you’d rather read we’ve got you covered.

Before you begin, the most important thing to know about this particular technique is that it creates REALLY BIG pom poms. Like softball-sized poms. And because the pom poms are so big, they require A LOT of yarn.

The images you see in this post of the pink pom pom I made required 150 loops around the tp rolls. And truth be told, it really needed to be at least twice that many loops, or more, if I had wanted a really full, fluffy pom pom.

If you’re not wanting to make mammoth pom poms, then try making mini-pom poms with a fork, or using a pom pom maker to create your poms.

1. *DO THIS TRICK FIRST*. Lay several inches of yarn on top of one toilet paper roll.

*This little trick is not in ANY tutorial I saw for this pom pom making technique.

When I struggled to tie off the pom pom when I made a pom pom like this the first time, I dreamed up this shortcut. It makes this process SO much easier at the knot tying step at the end!*

Cut a length of yarn…say 8″ or so. I’m using a contrasting color to the rest of my pom pom so that it stands out for you in the photos,

but you can use the same color as the rest of your pom pom will be. Rip or cut a little slit on either end of one of the toilet paper rolls and secure your 8″ piece of yarn through the slits as seen below.

Place the loose ends of the yarn inside the cardboard tube.

2. Wrap yarn around side by side toilet paper rolls.

Not much else to say about this step. Just start wrapping.

You’ll have to secure the end of the yarn initially, but eventually, it will be secured by the rest of the wrapped yarn around it.

You’ll want the yarn thickly layered on the toilet paper rolls if you want a full, fluffy pom pom. I wrapped mine 150 times around, and it wasn’t even close to enough.

I’d estimate you need 300 times, possibly even a few more rotations in order to get a really puffy pom.

Once the yarn is thickly layered enough around the tp rolls, snip the end of the yarn.

Now you’ll want to pull out the ends of that piece of yarn (blue in the photo) whose ends were tucked inside the tp roll.

Tie a knot as tightly as you can around the layers of yarn. This will cinch the middle of the wrapped yarn and give you something that looks a bit like a bowtie pasta noodle!

Grab your sharp scissors, and snip the loops using the gap between the two tp rolls as a channel for your cut.

You’ll end up with a shaggy looking pom pom at first.

All that’s left to do is shape up your pom pom by trimming it so that the yarn is roughly the same length all around the pom.

Again, I did 150 loops around my tp rolls for this pom, and I think I could have used TWICE that number to make a fluffier pom pom.

I think that this technique would be easiest for a multi-color pom, or a pom where you’re rolling from 2-3 yarn balls simultaneously. It would be much quicker rolling from multiple balls.

And that wraps it up 😂. You’ve now learned how to make yarn pom poms with cardboard tubes/toilet paper rolls!