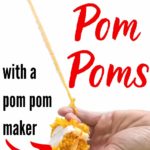 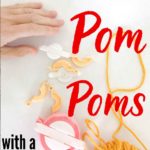 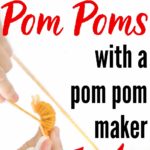 How to use a pom pom maker for yarn pom poms…

But using a store-bought pom pom making tool is certainly not the only way to make pom poms!

1.) How to make pom poms with a fork (especially good for really tiny pom poms)

3.) How to make pom poms with cardboard (great if you haven’t decided pom pom making is something you want to buy special tools for yet)

To make pom poms with a pom pom maker, you’ll only need a couple of basic things…

*my grandmother bought me my first pair of real fabric/sewing scissors. she swore by this kind, and I have as well, ever since

This 3-minute video shows the entire process for how to make yarn pom poms with a pom pom making tool.

But if you’d rather read the instructions with photos, simply scroll past the video.

Oh, and before moving on, if you’re the type who loves decorating your home BIG time, but on a small-time budget? Then you’ll want to grab a free copy of “Builder-Grade To Beautiful: 10 Totally Transformative Home Decorating Solutions, All Under $100!” Click here or on the image below. Your copy will be sent right away!

Steps: How to Make Yarn Pom Poms with a Pom Pom Maker:

The video above will show you all you need to know, but if you’d rather read we’ve got you covered.

The great thing about purchasing a package of several pom pom makers is that you’ll have flexibility to create pom poms of all different sizes. The one seen above was made with one of the smallest varieties.

These little tools are great, but kind of flimsy (purposefully as they need to come apart during the process). So if your pom pom makers aren’t fully assembled when they arrive, don’t sweat it. They are easy to put together.

In the shot above, the arms are open. Below, they are closed, which makes the tool form a circle.

There is a top and bottom to each tool, as well as 2 sides. The sides fit together as shown below.

2. Wrap yarn around one side of the pom pom maker.

Open one set of yellow arms. Eventually, you’ll be wrapping the yarn around each set of arms. But start with either side you’d like.

You’ll have to secure the end of the yarn initially with your fingers, but eventually, the yarn will be secured by the rest of the wrapped yarn around it.

Continue wrapping yarn around the pom pom maker arms. Avoid wrapping over the flat “feet” on the ends of the arms (kind of the bases of the rainbow, if you think of the arms as being rainbow-shaped).

That will make it difficult to close the pom pom maker, which is important for it to be able to do after this step.

You’ll want the yarn thickly layered on the pom pom maker if you want a full, fluffy pom pom.

You may have to play around with it a bit to get the right number of “wraps” down for your pom poms.

Once the yarn is thickly layered enough around the two arms, snip the end of the yarn.

4. Close arms. Open other side of pom pom maker.

With one side of your pom pom maker fully loaded with yarn and the excess yarn snipped, it’s time to close the arms.

Simply fold them back into the tool so that it again forms a circle.

Pssst…remember! Don’t leave here empty handed! Grab a copy of “10 Totally Transformational Home Decorating Solutions – All Under $100” now. Click here or on the image below to grab yours now⤵️

5. Open opposite set of pom pom maker arms and wrap.

Now it’s time to repeat this process on the other side of the pom pom maker. Holding the loaded side closed, open the empty set of arms.

Again remember to layer the yarn thickly across the full “rainbow” taking care to avoid wrapping over top of the flat “feet” area.

Once the arms are covered, cut the excess yarn and close the arms.

With both sets of arms closed, and the pom pom maker fully loaded on both sides with yarn, it’s time to snip!

Starting on one end, use your scissors to snip the yarn loops down the center of each side. The channel between the two sides of the tool will serve as a guide for cutting.

Continue from end to end, making sure each and every yarn loop has been snipped.

You’ll also want to be sure you continue to hold the arms CLOSED as you’re snipping. If you let go, one or both sides will open…and bye bye pom pom ☹️.

Once all of the loops have been snipped, you’ll be able to see an open channel, dividing the tool in half.

The channel between the two sides of the pom pom maker is where you will insert a fresh piece of yarn in order to secure the pom pom.

Carefully work a piece of yarn into that channel,

pulling the yarn toward the center axle of the tool. Continue holding the arms closed as you do this.

Once you feel the yarn is in the center of the tool, continue to pull the yarn out toward the opposite side.

Now it’s time to tie this yarn in order to secure the pom pom.

Carefully let go of the arms, and use both hands to tie.

Tie a knot as tightly as you can around the layers of yarn. This will cinch the middle of the wrapped yarn.

Start by opening one set of arms, and pulling them loose of the yarn.

Do the same to the other set of arms. Carefully pull them out of the pom pom. Pull the axles out (the white pieces) if they haven’t already fallen out.

You’ll end up with a shaggy-looking pom pom at first.

All that’s left to do is shape up your pom pom by trimming it so that the yarn is roughly the same length all around the pom.

It will take a couple passes around the pom pom to get it all trimmed up.

And that wraps it up 😂. Check out your first perfect pom pom!

Interested in other fun crafting ideas? Be sure to check these articles out, too!