Read all about Behr Dolphin Fin, plus see 15 real homes that use it!

Behr Dolphin Fin (790C-3) is a soothing, soft, warm-leaning gray paint that just might catch you a little off-guard in the best of ways, and that’s probably why it’s such a popular offering from Behr.

Most warm grays tend to look greige because their warmth comes from brown or beige undertones.

Finding one “right” gray in the hundreds (or thousands!) of options can be difficult, to say the least. I find it helpful to start by deciding whether you prefer cool grays or warm grays. Although I personally love the tranquility that cool grays offer, I often find them to be a little too cool for many houses.

That’s why time and time again, I turn to warm grays. They offer timeless sophistication in a cozy wrapping. I often focus on popular Benjamin Moore and Sherwin Williams shades in this paint series. However, there are a few Behr shades that you shouldn’t overlook (like Behr Silver Drop).

I hope that this series shares all the information you need about each color to help you feel confident when choosing the next color(s) to grace your home.

What color is Dolphin Fin?

Today’s post is highlighting Behr Dolphin Fin, a gray paint that leans ever so slightly blue, similar to a dolphin’s skin color. It’s a gorgeous color that is warm-toned – but just barely. It’s also calming and subtle.

Although it might lean a tad warm, this shade is not a traditional warm gray. Because of some creamy undertones with a touch of blue, Dolphin Fin is probably best described as a coastal gray or even a stormy gray as it displays some interesting depth.

But don’t let those descriptions turn you away! It exudes cozy and inviting vibes that make any space feel welcoming and somehow soothing at the same time.

And since it looks so timeless, you don’t have to worry about using a trendy color that you’ll need to replace in a year or two!

What other colors are similar to Dolphin Fin?

If you decide that you like Behr Dolphin Fin but really want a Sherwin Williams or Benjamin Moore equivalent, I have a couple of options for you to check out!

Benjamin Moore Stonington Gray has similar undertones but leans to the cooler side of the spectrum than Dolphin Fin does.

People sometimes describe Dolphin Fin as a greige, but it’s really a gray color with some interesting undertones that make it lean warm. 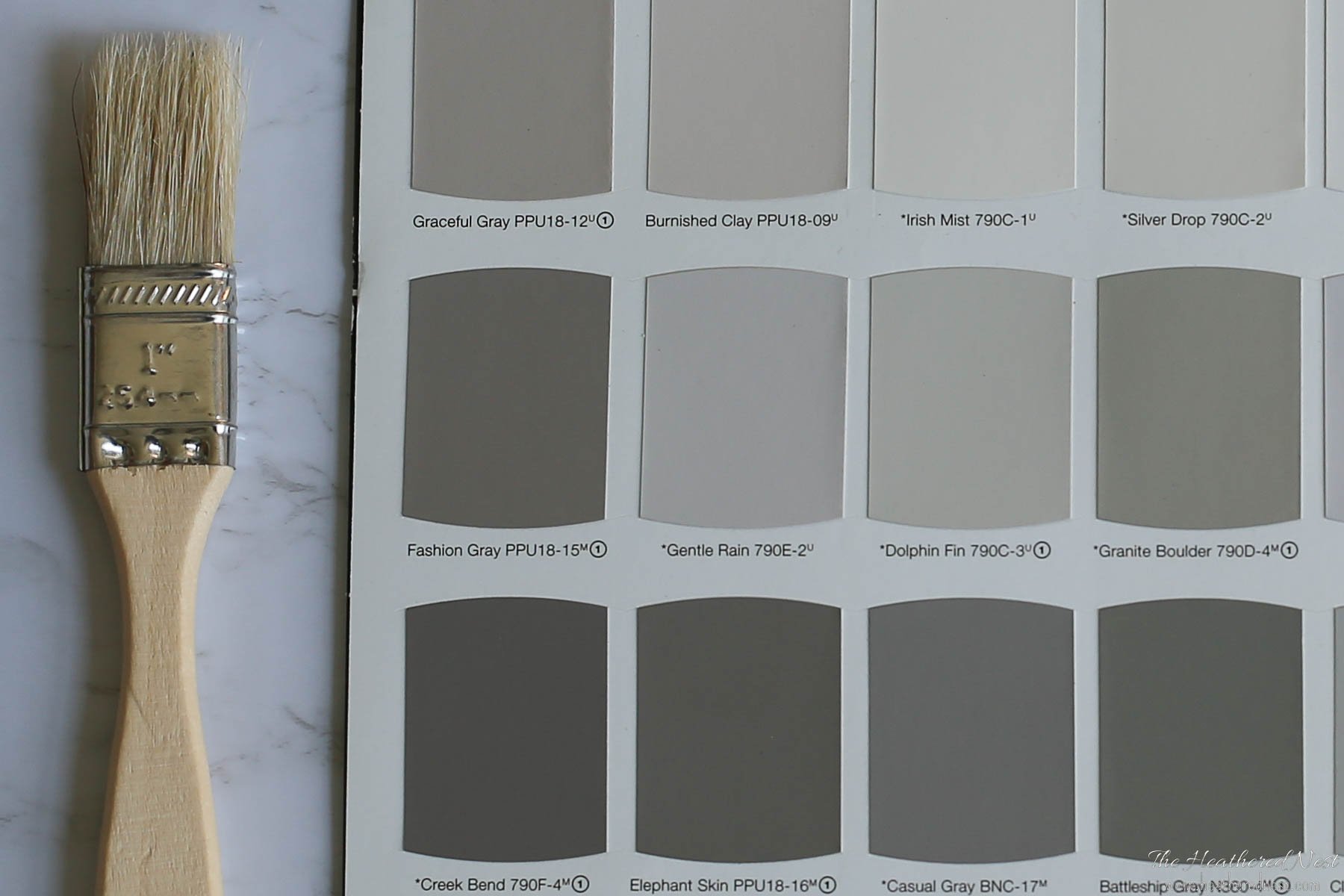 Where should I use Behr Dolphin Fin?

Are you having a hard time deciding where to use Dolphin Fin? Well, the good news is that you can use it in any corner of your house!

Dolphin Fin is neutral and versatile enough to work well with any decor and house style! 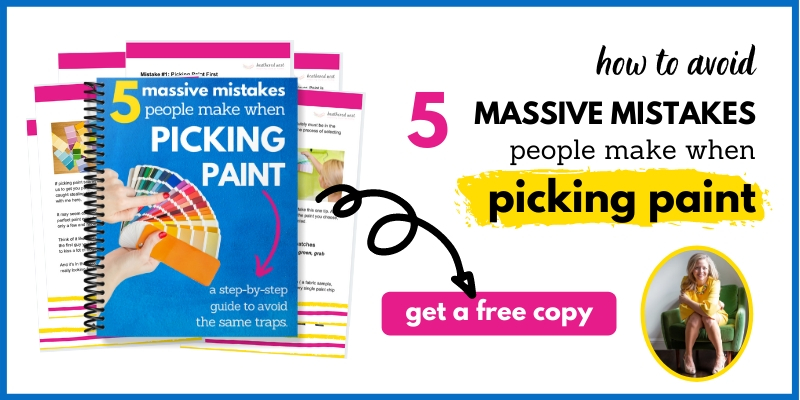 Dolphin Fin is considered to be a warm gray. However, instead of getting its warmth from brown or beige undertones, it comes from creamy undertones that add neutral and versatile qualities. The unusual thing about this gray is that it also has soft blue undertones that give this color calming vibes.

Since warm cream and tranquil blue act as contradictory vibes, lighting will play a large part in how this shade appears.

Natural light exposure shifts throughout the day as the sun moves through the sky, which can have a significant impact on how a paint appears, NO paint color will look the same at different times of the day or in two different locations.

Use paint swatches to see EXACTLY how your lighting and decor will affect the way your paint looks. This is especially important with a shifting color such as Dolphin Fin because it can appear warm or cool depending on the time of the day.

Here’s a general idea of how Dolphin Fin may appear based on different types of natural lighting.

NOTE: If you love Dolphin Fin but want to encourage its light and airy, creamy side to appear more often, supplement any natural lighting with artificial light!

One of my favorite qualities about Dolphin Fin is how easy this color is to work with. It just pairs well with many colors, from crisp (or creamy) whites to browns, dark blues and grays, taupe, green, and even bronze.

If you need some specific color combination ideas, check out these shades that shine when paired with Behr Dolphin Fin:

LRV is an abbreviation for “light reflective value.” Why do you need to know the LRV of a shade? It’s a helpful and objective way of measuring how much light is reflected (rather than absorbed) by a particular shade. In other words, it’s a simple and reliable indicator of how light a color will appear.

LRV ranges from 0 – 100. A color with an LRV of 0 is pure black. On the opposite end of the spectrum, an LRV of 100 is the brightest white you can imagine.

An LRV in this range indicates a shade that falls on the light side of medium darkness. Dolphin Fin has rich color and enough depth to prevent washing out in bright lighting. It’s also light enough that it can work well in rooms with low light levels.

LRV…what? Don’t worry, I’ve got you! Grab a FREE copy of my new guide to avoid the paint color picking mistakes people make! Click here or enter your email below. I’ll send the tips right away!⤵️

Dolphin Fin Compared to Other Colors

I’m going to compare and contrast this hue with some other similar (and popular) paint colors to highlight the unique qualities of each shade. Here we go!

To begin, let’s compare Dolphin Fin to one of the most popular paint shades, Sherwin Williams Agreeable Gray (#7029).  A true greige, Agreeable Gray’s LRV of 60 lands right in that range that I call the magic number because it’s pretty much the perfect saturation for both light and dark rooms. Dolphin Fin is just a smidge darker.

Both of these shades have a creamy quality, but Dolphin Fin appears cooler and more blue next to Agreeable Gray’s strong beige undertones.

Sherwin Williams Repose Gray (#7015) is another gorgeous and popular greige. It has VERY similar undertones as Dolphin Fin, with just a little extra beige. With an LRV of 58, this shade is technically just a tad darker than Dolphin Fin, but its beige undertones make it appear about the same saturation and a hint warmer.

Silver Drop (#790C-2) is another popular shade from Behr. Its LRV of 70 makes it read noticeably lighter than Dolphin Fin. In addition, Silver Drop has stronger beige/yellow undertones to give it a warmer greige appearance.

If you’re working with a dark room, I would favor using Silver Drop because it will still give you that gray feel but warm the room up a little more.

Gah! Choosing gray and greige colors can be tough! If you just aren’t ready to hand over your hard-earned cash for cans of Dolphin Fin, check out these other popular, and somewhat similar colors that may just be your perfect gray color:

Ok, boring part over! The info above is essential for giving you some background on Dolphin Fin so that you have the basics. But many people find visualizing a shade in different settings just as helpful.

With that in mind, I found real-life homes, rooms, and other spaces using Behr Dolphin Fin for you to see!

A quick note here: don’t forget to consider picking the right paint finish…it’s not only about getting the color right! We have an in-depth explanation of choosing sheens here.

1. An Ideal Gray in a White Kitchen Space

Dani of Gold Coast Canvas makes great use of those blue undertones I mentioned earlier. Doesn’t Dolphin Fin give off terrific chic and tranquil vibes?

The warm lighting in this kitchen from Little Glass Jar draws out the creamier neutral qualities of Dolphin Fin so that it’s just a gorgeous light gray.

The cool lighting in this living room pulls out the gray in Dolphin Fin and creates a stylish and stunning living room for @eyeforpretty.

Bright warm light shifts Dolphin Fin towards the creamy end of its spectrum. But notice how the shadows down near the bottom of the wall draw out the blue undertones in this example from A Lovely Lark.

Houzz always shares drool-worthy images. Dolphin Fin was an inspired choice to create a room that is chic, stunning, and timeless.

In general for bedrooms, and low-traffic areas, flat paint is fine. If you like something with a bit of shine (and more ease of cleaning) opt for eggshell or satin.

6. Brightens Up a Room

List in Progress used this shade to make this small bedroom feel light, airy, and cozy. It’s the perfect neutral for this room!

7. A Balanced Gray for Low-Lit Space

If you want to avoid blue undertones, a space like this one from @immeasurablymorehomes shows how possible it is with Dolphin Fin. Those subtle blue undertones don’t even peek through!

Dolphin Fin can work for rustic and farmhouse-style homes just as easily as it can shine in coastal homes, as this bedroom from Sobremesa Stories shows.

Don’t forget the finish! For bathrooms the perfect sheen is either an eggshell or satin. Why? We’ll tell you in this post about paint sheen.

Dreaming of Homemaking highlights how creamy artificial lighting can make Dolphin Fin appear. Don’t shy away from this lovely color just because you have a dark room!

This chic bathroom from Houzz shows just how neutral Behr Dolphin Fin really is. If you’re going for a monochromatic color scheme, consider this shade!

The appealing thing about blue undertones is the sense of tranquility and peace they provide. All Things Heart and Home used those undertones to their full advantage in this bathroom!

Now let’s see how this dolphin gray works in other spots in a home…hallways, playrooms, laundry rooms and more…

As a brighter room on this list, this mudroom/hallway from Life on Virginia Street demonstrates how (especially when used at 50%) Dolphin Fin can wash out in bright light. However, it still provides plenty of saturation to pop against the white accents.

14. Gray Doors for a Unique Contrast

I love painted interior doors! Lantern Lane Designs used Dolphin Fin on this door, and I don’t think there could have been a better choice. I love that subtle gray-blue!

Gray and chic are how I would describe Behr Dolphin Fin in this laundry room from Krystin Lee. The brass handles are a lovely accent choice! Photo credit: Carlous Sousa.

So, what do you think? Have I convinced you that Dolphin Fin is worth a closer look? I hope so because it’s a gorgeous shade that can add just the right depth, sophistication, and timelessness to your space. Don’t forget to pick up some paint samples to adorn your walls before committing to any color! 😉

Pin this paint color for later! And if you use this paint shade, leave a comment on the pin! That helps others decide if they want to try this color, too!

Ready to show those boring, beige walls who’s the boss at home? Grab my free guide to help you sidestep the mistakes that almost everyone makes when it comes to picking paint! You’ll be on your way to perfect paint promptly…pinky swear.